When this interview was given, the independent proof of the plane speed at approximately 530 MPH that Craig demanded was not available. While the Flight Data Recorder (FDR) does provide speed information, the authenticity of the FDR data has been questioned. The FDR may be authentic, but there are many questions that I cannot answer.

Therefore, I only use the FDR as a supplement when it is corroborated by other data – not as a primary source of information.

But now, since the spring of 2018, there is a new independent source for the plane’s speed.

An analysis of the two security cameras at the Pentagon security gate provides a great deal of information. The two cameras were located at approximately the same vantage point and recorded images with a fraction of a second timing difference between them.

The difference in timing of these security cameras was determined by an analysis of the movement of Mickey Bell’s truck as he drove away moments after the plane impact. The results showed that the images were taken with a 4/30th of a second difference. 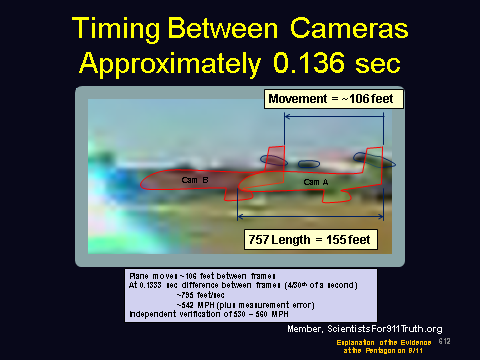 Figure 1: Comparison of plane location in security cameras shows movement of 106 feet. This distance traveled in 4/30th of a second translate to 542 MPH.

This video provides a complete discussion of the security camera analysis

The core assertion made in the New Pearl Harbor about the security cameras is:

Given that the maximum fluctuation between the two cameras would translate in a difference of 25 feet in the position of the plane, can you provide a valid explanation for the large discrepancy between the two corresponding frames.

Absent a valid explanation for this discrepancy, we must conclude that at least one of the two frames is the result of intentional manipulation, or “photo shopping.”

The answer is that the images were taken 4/30th apart. Thus accounting for the 106 feet of horizontal motion in this time frame allows a speed of 542 MPH to be calculated.