In Figure 1, Dewdney has clearly placed the plane on the wrong floor and then asserts that if the wings did not shear-off, then they must have broken and as they could not enter the building 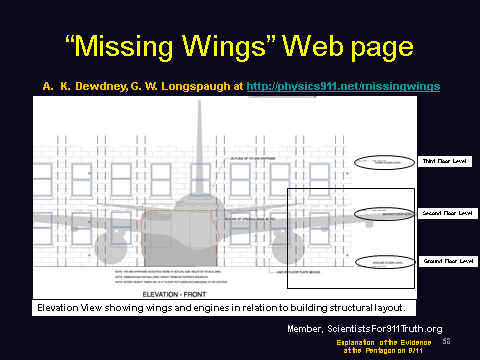 Figure 1: Drawing Form “Missing Wing” page showing plane impacting the Pentagon facade at a random location about 1 to 1-1/2 floor above where the damage to the facade indicates.

The following quote sets up the illogical “strawman argument” that constructed, based on the drawing in Figure 1, which he uses to conclude the wings must be outside of the Pentagon and did not enter the building. Craig cites as part of his evidence – even though he refutes its central hypothesis by acknowledging a 90 foot opening in the first floor (allowing more than enough room for the wings to have entered the Pentagon building.)

There would be no way, of course, for the wings to enter the building without taking out any support columns in their path. Structural integrity of the wings, as well as the lack of any holes on either side of the main initial entrance hole, preclude the wings from breaking into eight-foot fragments which then passed into the building individually. In any case, a majority of windows on the ground floor (not to mention all floors above them) remained unbroken after the crash – Dewdney at Missing Wings

A more complete description of this issues can be seen in the following video: