While Craig ignores the stagnant numbers on his petition and Facebook group – and possibly declining numbers – a consensus is forming. This is based on a through evaluation of the evidence – describing the mechanism that created the damage, describing the location of the debris field and identifying parts of the plane and light posts that were not previously part of the discussion.

An extended overview of the evidence is now available: 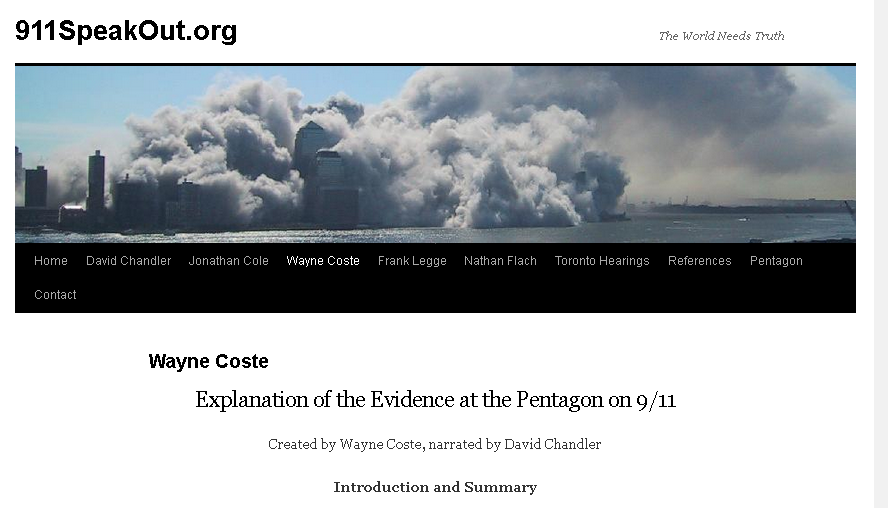 In December 2017 the 9/11 Consensus Panel issued a statement addressing the controversy within the 9/11 Truth Community about what happened at the Pentagon. The concern was that the disagreements in this area threaten to undermine good will and mutual trust. The statement offers the prescription, “Contributions seeking to solve contentious issues can only be made by assembling reliable evidence and by applying critical thinking and peer review according to the standard scientific process. This is the strength of science and the way it has progressed over centuries.” and concludes, “In conclusion, we offer the “agree to differ” approach: to end an argument amicably while maintaining differences of opinion until there is an explanation that does justice to all the various types of evidence.”

Over about a three year period Wayne Coste has been engaging in dialogue with some of the leading contenders for theories alternative to large plane impact and has been assembling a comprehensive compilation of the evidence that any successful theory must answer. When he read the Consensus Panel’s statement he saw it as a challenge that he had largely already met. He pulled together his research and assembled it as a single presentation entitled, “Explanation of the Evidence at the Pentagon on 9/11.” He re-framed this as “Answering the 9/11 Consensus Panel Challenge.” He turned the Powerpoint into a video, with the downside that the running time was a virtually unwatchable 5h 40m. He just wanted to “get it out there.” I saw the tremendous value of this body of work, so I stepped in and offered to narrate the video as a more manageable series of chapter-by-chapter videos. That brings us to this series of videos.