Craig asserts the validity of the C.I.T. hypotheses which is: there was no large plane impact at the Pentagon because a north-of-Citgo flight path would have required that the plane flew over the Pentagon – with explosive alone doing all the damage to the interior, exterior facade and the environs.

I’ll also mention the fact that there were some extremely credible and compelling witnesses interviewed by a group called Citizen Investigation Team (C.I.T.) that put the path of the plane entirely up to the north of the Citgo gas station …. And this path is completely irreconcilable with the physical damage.

It is astonishing that Craig would refer to these people interviewed by C.I.T. as “extremely credible and compelling” when they have made so many contradictory statements vis-a-vis what they told the C.I. T. interviewers. If they had been other witnesses that claimed they saw a plane approach the Pentagon, Craig would have (and has) discarded everything they said because of any apparent contradiction.

The following video shows some of these contradictions that make the C.I.T. witness neither credible nor compelling.

If the plane actually traveled along the path that was north of the Citgo station and came anywhere near the impact point, the plane would have experienced about 9.7 G-Forces. As shown in Figure 2, if the plane were to have traveled through the 14,300 foot corkscrew turn, and passed over Tom Trapasso’s back porch at 1400 South Barton, then it would have required a 7.8 G-Force to turn and pass over the Naval Annex and toward north side of the Citgo station.

Both strenuous turns would have had to be done in about 25 plane lengths (about 4,000 feet) using only air motion across the wings and control surfaces to make these maneuvers. 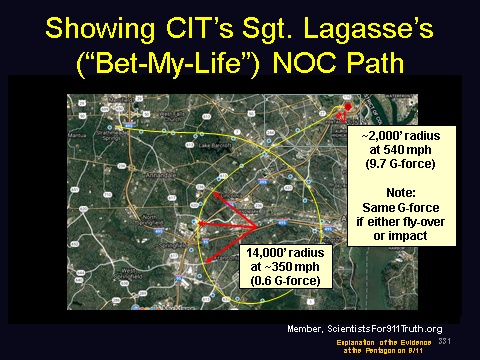 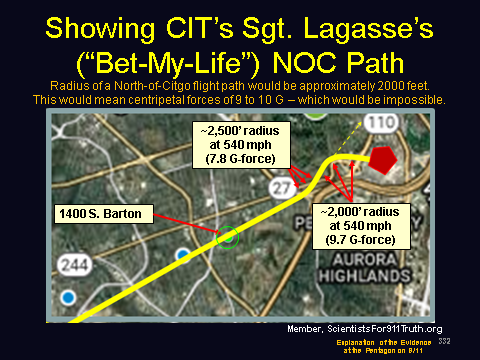 Analysis of the Plane Approach