A reward is being offered to help Craig McKee save face.  He has claimed that Lloyd England has frequently, clearly and unambiguously identified the 25-30 foot, long part of the light pole #1 as the pole that smashed in Lloyd’s windshield.

A $200 reward is offered to the first person who can produce links to this missing documentation. 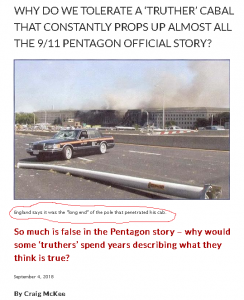 Craig needs to document where this claim comes from – so help Craig “back-up” what he has been asserting for years, but never documented. Find where Lloyd says clearly and unambiguously that the 25-30 foot, long part of the light pole #1, shown in this photo, is the pole that smashed in Lloyd’s windshield.

The following are the terms and conditions for claiming this reward:

Send the submission, with links, to specific parts of the documentation showing where  Lloyd frequently, clearly and unambiguously identified the 25-30 foot, long part of the light pole #1 as the pole that smashed in Lloyd’s windshield.  To cover the “frequent” assertion, at least two instances need to be included in the submission. If additional research locates additional quotes, send in the revised submission.

Selection of a winner

The recipient of the reward will be made public no earlier that November 1, 2018 to allow multiple researchers to perform comprehensive searchs of the historical archives related to Lloyd’s statements.

Payment will be made no earlier than November 1, 2018 – by Paypal, check, or USPS Money order.

Examples of what doesn’t qualify as a “clear and unambiguous” statement are: